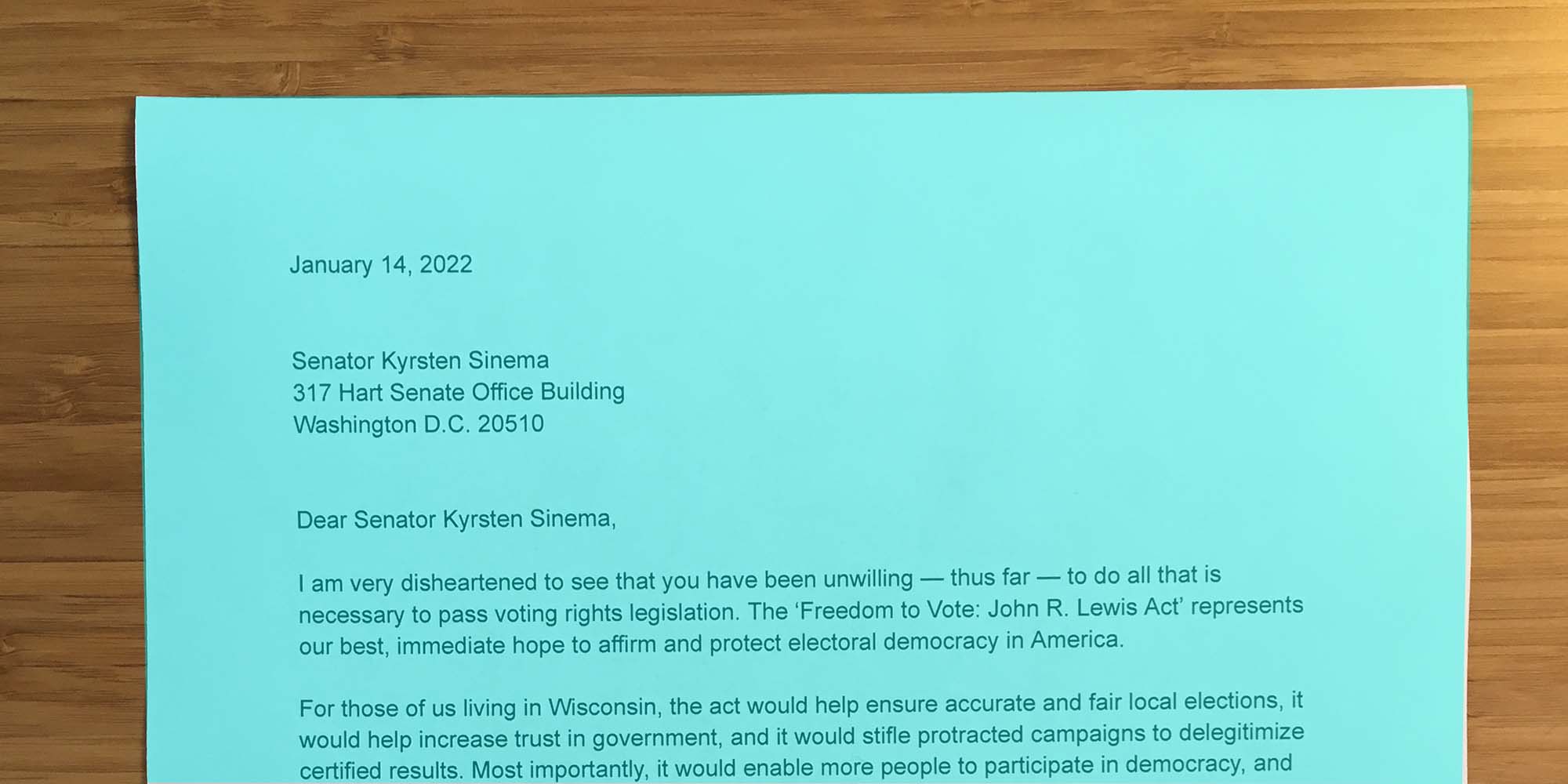 I am very disheartened to see that you have been unwilling — thus far — to do all that is necessary to pass voting rights legislation. The ‘Freedom to Vote: John R. Lewis Act’ represents our best, immediate hope to affirm and protect electoral democracy in America.

For those of us living in Wisconsin, the act would help ensure accurate and fair local elections, it would help increase trust in government, and it would stifle protracted campaigns to delegitimize certified results. Most importantly, it would enable more people to participate in democracy, and it would empower voters to defend their elected leaders who resolve to collaborate and compromise for the common good — something I commend you for wanting to do.

Without it, Senator Ron Johnson is likely to be re-elected. A federal official who consistently demonstrates no concern for democracy or people. Time and again, he has shown he is only partisan and disingenuous. Without this bill, he — and others like him — are who you will have the fortune of working with, finding common ground with, and compromising with, in the Senate.

I can understand your desire to fight partisanship. I too believe political and social division is among the most critical, foundational concerns in America today. But unless the federal government renews its commitment to protect voting rights this year, Congress will have missed its best, last opportunity to affirm that its power derives from the will and the work of the people.

Eliminating the filibuster, to pass this legislation, will not worsen the disease of division. As a U.S. Senator, at this moment, in the shadow of an insurrection, inaction is partisanship, and constitutes working in direct opposition to the best interests of the people of this country who you wish to serve. Your colleagues have built a coalition of leaders choosing cooperation over partisanship, and they need your support to bolster voting rights and defend democracy.

Senator Sinema, please, I implore you, as a fellow American and as a Wisconsinite desperately wishing to have a Senator that tells the truth and defends my rights, do not let procedural hurdles stand in the way of passing voting rights legislation. Do not delay this bill for political strategy, and do not effectively tie the nation’s health and fate on the merits of the filibuster.

We need voting rights legislation infinitely more than we need to extend our political power, in the name of bipartisanship, to people in Congress who continually stoke division and turn a blind eye to the toxic effects of their rhetoric and consistent opposition to rational governance. Under the leadership of Senator Mitch McConnell, such a course is futile, for the ends you seek.

I have enclosed $1 for your re-election campaign. If you are willing to do all that you can to pass voting rights legislation this term, I will do all that I can to help you stay in Congress. I cannot vote for you, but I can donate money and I can pledge to fiercely lobby my parents and friends who live in Arizona to support your campaign and to vote for you in upcoming elections.

May you find the courage to stand for people over institutional power, as John Lewis did throughout his life, and as I believe John McCain would do, in this instance, if still in the office.